How Much Are The Main Political Parties Spending On Facebook Advertising Ahead Of GE2020? 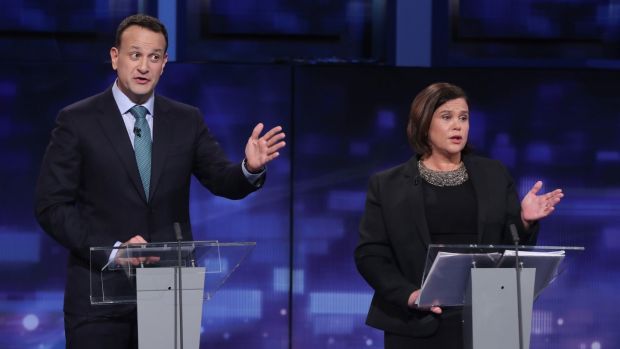 Digital Marketing over the last number of years has become one of the most important channels when it comes to getting your brand, business and beliefs online. Therefore it should come as no surprise that ahead of GE2020 that the main political parties in Ireland are spending more money on their digital advertising than ever before! At this moment in time, we have no visibility of each party’s overall spend across SEO or PPC but using the Facebook Ad Library platform we have been able to see how much each party and politician has spent on social advertising.

The Facebook Ad Library was created after the Cambridge Analytics scandal following the widespread criticism over the spread of “fake news” on their platform during the US Presidential election & Brexit back in 2016. This tool keeps the parties honest and helps give us an insight of just how much they are spending on bringing their message to the public through new media. Right now there is no cap on spending for political parties using digital ad campaigns but there is a limit on how much a candidate can spend on their overall campaign.  For a five-seat constituency, the spending limit is €45,200. For a four-seater, the spending limit is €37,650 and for a three-seater, it’s €30,150. Within those limits, there are no rules regarding how much of a candidates outlay can be spent on digital advertising.

We can see from the above chart that Fianna Fáil & Fine Gael have far outspent their rivals in the last month leading up to the election, spending €56,388 & €57,592 respectively. This is more than double what Sinn Féin (€14,250) & Labour (€9,056) have spent in the same timeframe. As you might have guessed the smaller parties without the gargantuan budgets have spent far less with the Green Party having spent €1,683 in total with Solidarity (€1,228) & The Social Democrats (€1,188) at the back of the pack.

Let’s take a look at the parties in more detail to see how they are spending and how they have been getting on:

Fine Gael has spent the most so let’s look at them 1st. Having already spent more than any other party on their campaigns, they also spend more on a candidate level. In the period we are looking at (Jan 5 – Feb 3) Leo Varadkar personal campaign has totalled €6,775, considerably higher than the next nearest individual, Fianna Fáil’s Michael Martin at €2,087 in the same period. While we are not political commentators this data leads us to believe that rather than vastly outspend on a party v party basis Fine Gael are leveraging the current Taoiseach over the party in their drive to stay in government.

On a party level, Fine Gael have taken a wide-range approach to their social advertising, focusing on what it says it will do if it gets returned to government while they have also been targeting specific areas to show what their plans will mean for that county. Turning their slogan into #LookForward doubles down on their message of focusing on what they hope to achieve in the future rather than focusing on what they have done as the party in power over the last number of years. 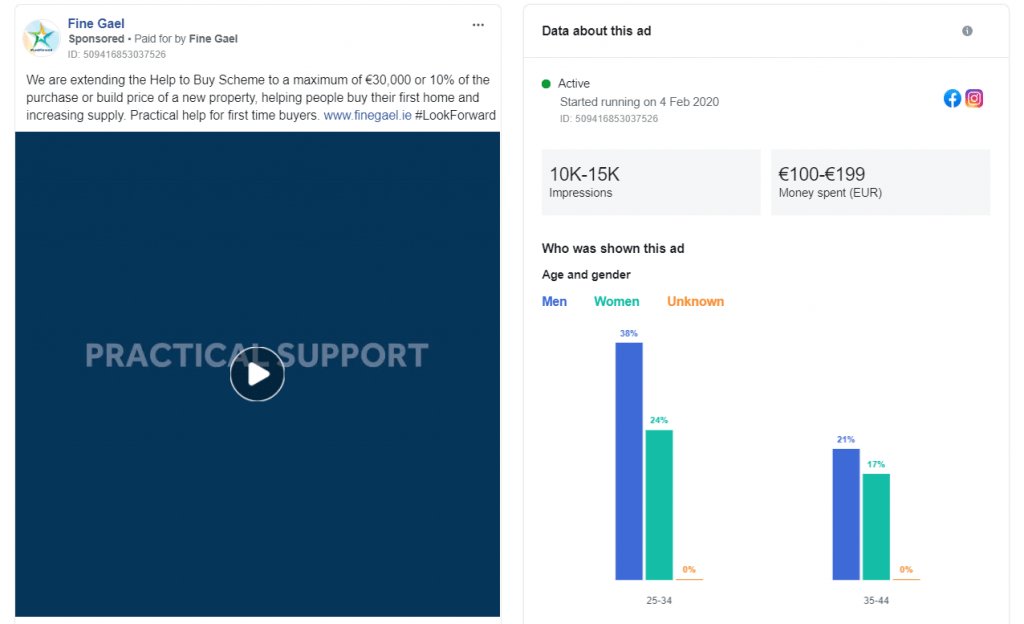 Above is just one of the ads the party are running at the time of writing. This ad has been live since Feb 4th and it’s 1st day they have spent between €100-€200 and has been seen approximately 15,000 times. We can see from this and their account overview page that they are prioritising this type of messaging with a mixture of image, graphic and video content.

From Facebook Ad Library we can also see that since the platform went live, Fine Gael has spent over €70,000 with most of this spent within the last month. This trend is very similar to Taoiseach Leo Varadkar, his page as we have mentioned has spent €6,775 in this period versus a spend of €14,000 since March 2019. None of the other parties has invested in their leaders account to the same extent. 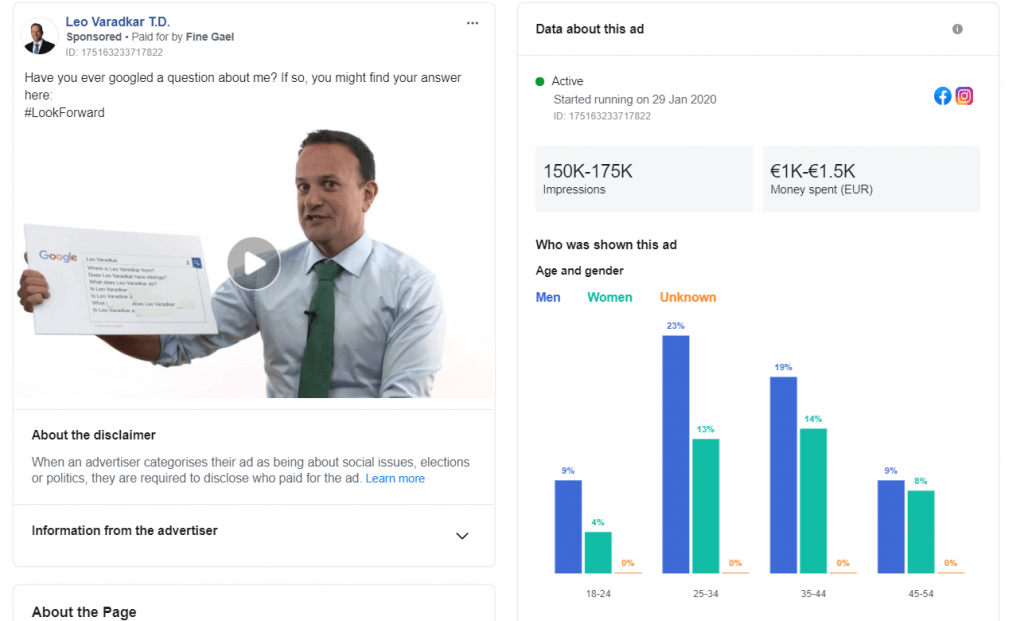 From both Leo’s and Fine Gael’s ads we can see that they are predominantly targeting the 25-44 age demographics and both ad groups have been predominantly seen by men.

Similar to Fine Gael, Fianna Fáil have spent significantly over the last 10 months and they have shown a similar spending pattern with over €70,000 since March 2019 but with most of this €56,388 coming on Jan 5th to Feb 3rd period. Their adverts are predominantly video-based and heavily weighted towards promoting specific candidates in their constituencies as well as some manifesto led campaigns and one sales pitch from Micheál Martin on how the party promises an “Ireland for all” if elected into government.

As we mentioned,  Fianna Fáil is using their page to promote the candidates through the party rather than doing it through their own social channels. As Facebook ads can be specifically targeted around geography, age demographic and interests, it means that as a party they can use their data to target potential voters as an overall rather than leaving this to local teams and opinion based targeting. This can be seen by the results of the ad campaigns so far. 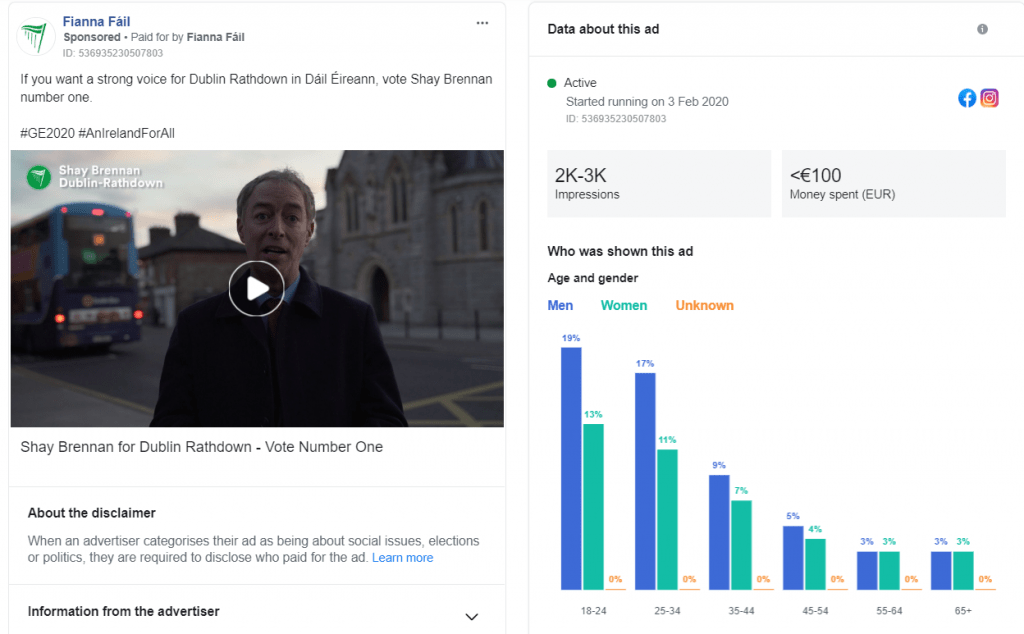 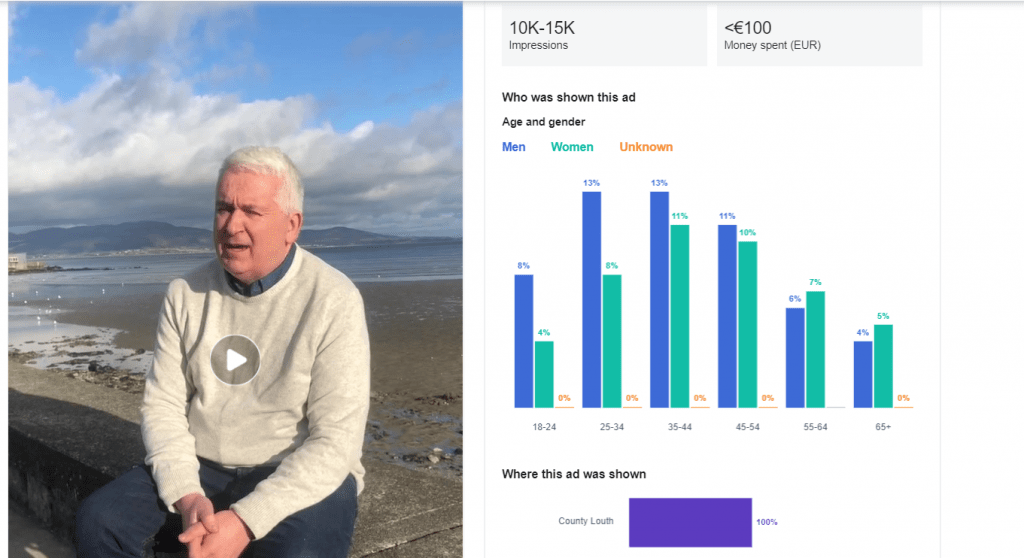 What we can see here is that obviously the Louth candidate and Dublin candidate are both specifically targeting the area surrounding their constituency but the age demographics they are targeting is clearly different. This is where we see some variety, with Shay Brennan’s ad he has been seen far less than Declan, this is because in Dublin there will be more competitive bidding for the same placements within the area, however, he has been placed in front of a higher % of younger voters, this is because the ad was also running across Instagram where getting the reach in a will be easier but it’s also where the younger age group are on social media. While we can’t be sure, we would presume that they have chosen automatic placements through a brand awareness or reach campaign for their adverts as the Facebook algorithm will then place the ad in the most likely place for it to be seen. In Shay’s case, this would mean in an area where placement will be harder to come by the best results were more likely to come through targeting the younger ages on their platform of choice.

Across the board we have seen all parties greatly increase their social advertising spend over the last 30 days, Sinn Féin’s total 10month spend of €22,054 has been predominantly spent in the last month (€14,250). Their strategy is also different to that of the big 2, with calls for change and alternatives being the order of the day. That includes how they run their ads, their campaigns are heavily led by their main three faces leader Mary Lou McDonald, finance spokesperson Pearse Doherty and housing spokesperson Eoin Ó Broin as well as pieces from their manifesto. While we could see that FF and FG are targeting the 25-44 age demographics, Sinn Féin ads are clearly targeting the 18-34 categories with dedicated ads for just Instagram ad targeting the 18-24 age group and the 25-34 age groups separately. 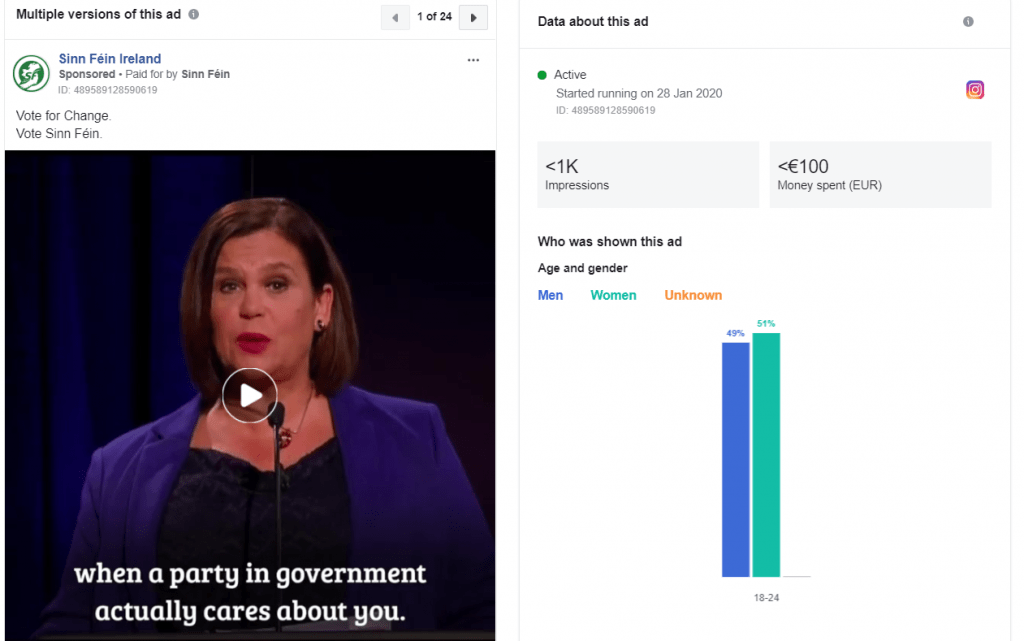 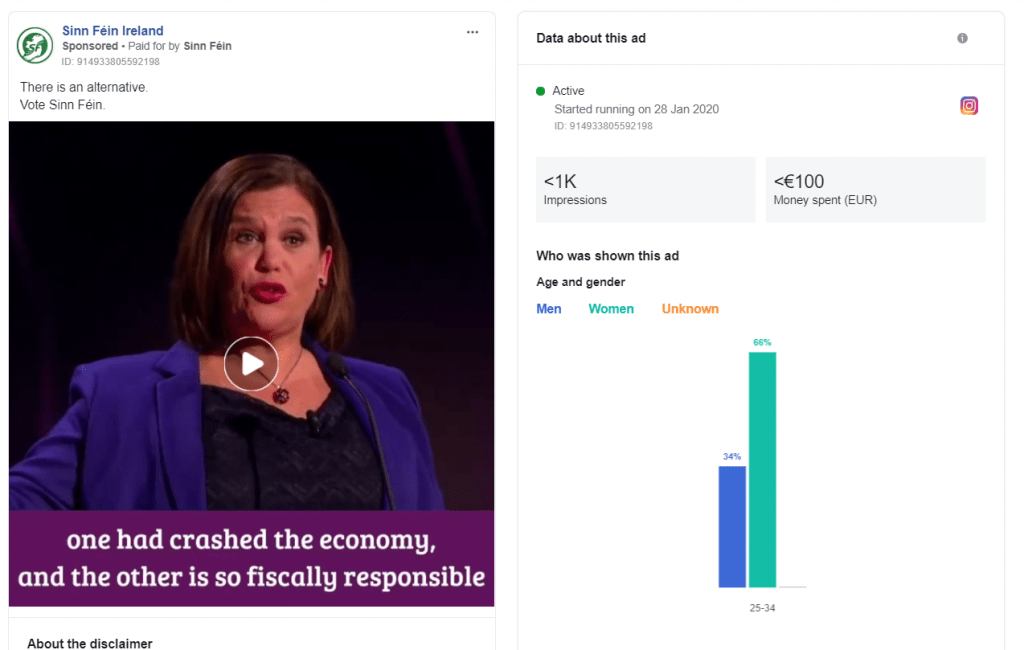 From this we can also see that their ad campaigns are getting placed in front of a higher % of female voters, this may be by design or through the terms of interest in which they are targeting. Again unlike their counterparts Sinn Féin are also using very different language ranging from a formal “introduce a rent reduction” to “G’wan Mary Lou!” again targeting different age demographics. This is clever because they have divided the potential voters into groups and are trying to talk to them in “their” language.

At the time of writing labour were running 3 ads, the least of the so-called traditional parties. All three ads are very specifically targeting female voters in the 35-44 age demographics. 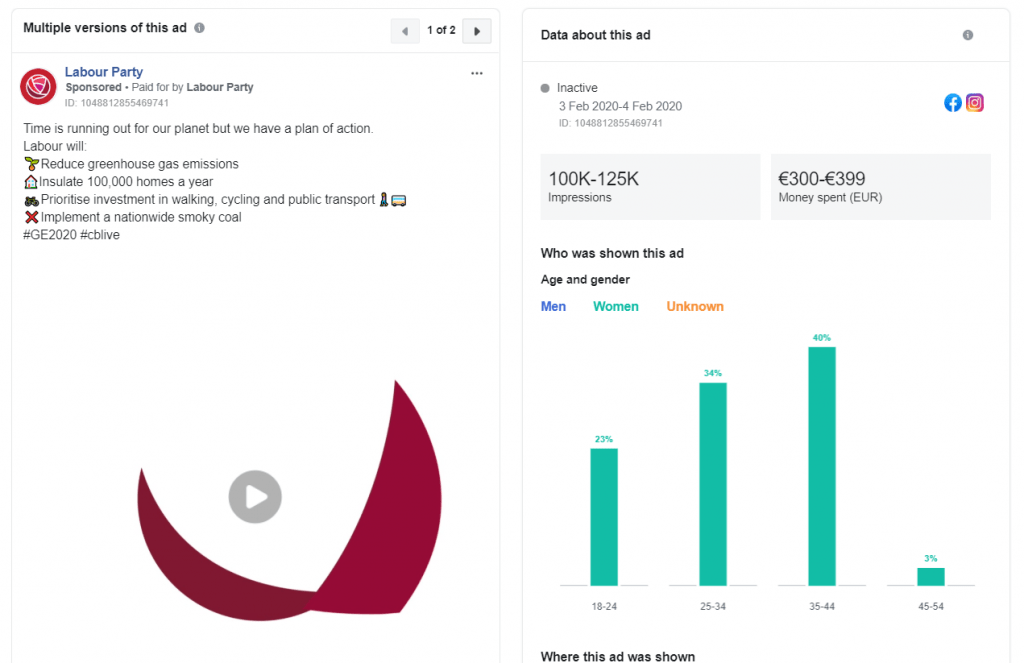 The Green Party, Solidarity-PBP and The Social Democrats as smaller parties have less budget to spend and that means, of course, they have to try and be more clever about how the spend, design and target for the best possible results.

The Social Democrats on the face spent €3,192 since March, with the last month accounting for €1,188 of this. They have clearly cherry-picked their 3-4 most likely to win candidates and have rowed their spend in behind promoting these on Facebook, Instagram stories and Instagram Feed rather than using automated placements. They have also created custom-sized imagery to suit story placement.

Of  The Green Party €2,741 since March 2019, €1683 of this has been used towards the General Election. Again they take an approach similar to that of the Social Democrats but they have added more copy to every add in an effort to get the candidates viewpoints across to potential voters. 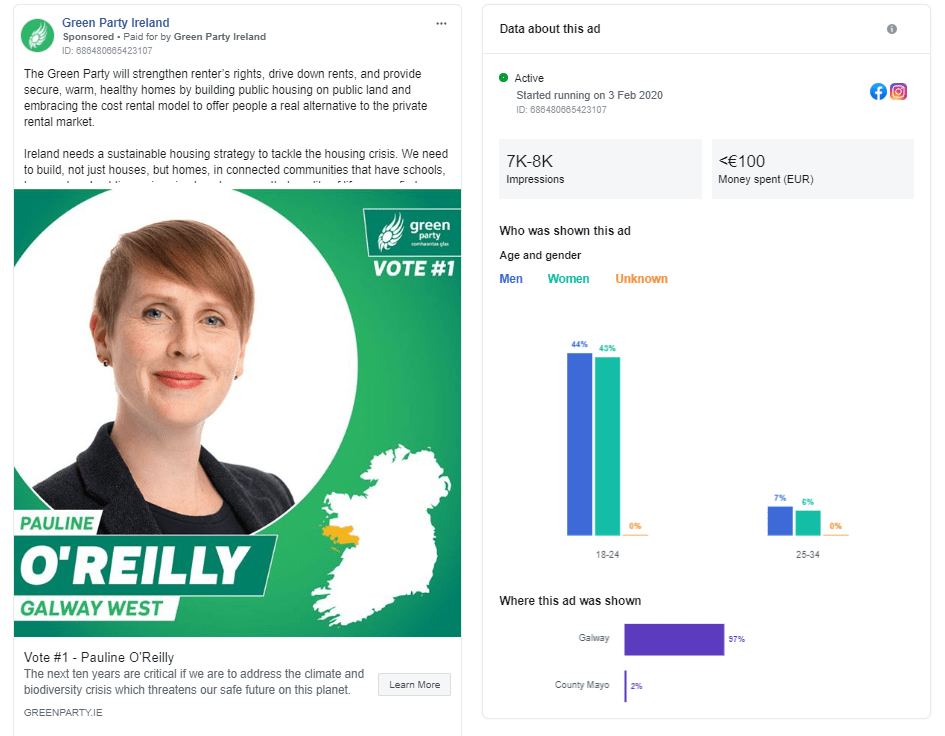 On A Personal Level

Before we go we also noticed that numerous candidates have paid money for advertising on the Facebook/Instagram ahead of the election. It allows candidates to target a specific area and pay relatively small amounts to have their advert appear for Facebook and Instagram users in that area.

We have seen an ad from Shane Ross which shows him about an about which has been seen approximately 3,000times with a spend of €100 and as we have mentioned earlier Leo Varakdar’s personal add account has spent almost €7,000 vs Michael Martins €2,000. This indicates that individual candidates are running adverts for small amounts that are €100 or less that add up, and will show outside the finances included for the main party advert spend.

Jon is our Inbound & Social Media Marketing Executive specialising in working with our clients to deliver growth through social media advertising. Coming from a sales and content background, Jon has a passion for delivering a high level of customer service with a focus on driving sales and increasing online revenue for our customers.

Core Optimisation is a performance-based digital agency which helps you grow your online revenue. Our starting point is always you. We get to know your brand from the inside out and the outside in. If you’re interested in learning more give us a shout!